WHY IN NEWS TEEN PREGNANCIES?

High teenage fertility in some areas remains a cause of concern in India even as the fertility rate has stabilize across the country for Teen Pregnancies, 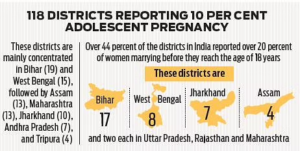